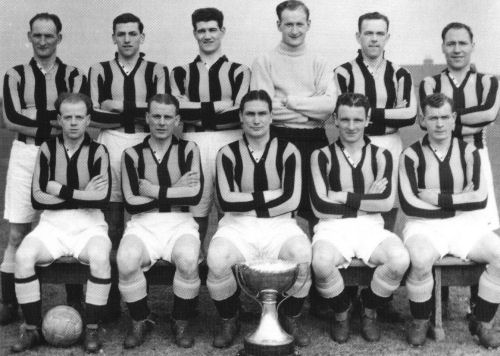 Football has changed and, in some instances, almost beyond recognition.

Seeing the Fife add to their trophy tally is perhaps not a realistic short term goal in modern day football. Seeing the club compete competitively with their Second division peers and emulate the likes of Airdrie, Cowdenbeath and Dumbarton by playing in the First Division, should be the minimum we are aiming for as a football club.

Looking to do this and actually achieving it are two very different things of course.

You would say money is a key factor in success these days, but you don’t look at the likes of Cowdenbeath, especially with the state of their ground and the crowds that they pull in, and decide that’s what’s done it for them.

There is no doubt that money helps of course and resources at a club like East Fife are not rich at the moment.

Regular readers will know that we’re also supporters of AFC Wimbledon. For me, they are everything that is right about football in a time where you really have to dig deep to find such examples.

Fan owned and operated, they rely heavily on their support to survive and thrive. But this well can run dry and it’s a struggle in recession hit days like these. The results are showing, with the Wombles now facing the real prospect of returning to their non league roots, being rooted at the bottom of League Two as I write this.

It is hard for them to compete with other clubs in the division who can splash some cash, much as it seems like it is hard for East Fife in our League 2.

Wimbledon are 20th in the league table of spending on players’ wages in the division and that table is usually indicative of where they will finish in the other, more important, table. Last season they punched above their weight, finishing 16th and being ranked 21st in the spending table.

I’ve been at Kingsmeadow for the Dons’ last two home games (against Port Vale and Burton Albion) and the fundraising efforts amongst the fans is something that a club like East Fife could learn a lot from.

Now obviously you can argue that there is a bit more wealth kicking about the likes of Merton and Kingston-Upon-Thames than there is in say Methil and Leven, but every little helps.

Wimbledon fans have just launched a “We Are Wimbledon Fund”, a new way to provide support to their club. The fund aims to raise £400,000 a year through direct debits and one off donations under the Umbrella of The Dons Trust. The money will go directly to the playing budget.

The aim is to raise additional money to that already raised to take them out of the “budget league relegation zone and up towards mid table”.

They also have a “Be A Womble ‘Til You Die…..And A Good Bit Longer” campaign where they encourage fans to include the Dons Trust in their wills.

We wish them every success in their efforts.

It reminded me of course of our very own “Manager’s Fund”. This hasn’t quite caught the imagination of our support.

For those that don’t know about it, the aim is also to raise money, no matter how big or small, towards the playing budget. The fund is ring fenced and anyone who contributes is entitled to know the current state of the Fund at anytime.

It’s hard when money is tight, but if we really want to see East Fife being more than lower league fodder, we’re going to have to step up and help do it ourselves, or failing that, find some nice rich local businessmen who want only the club to do well in return for their money.

I think most clubs would love that of course.

Enjoy this? Then give it a share...
Tags: East Fife, Scottish football, football finances, past glories, manager's fund, fundraising

This site uses Akismet to reduce spam. Learn how your comment data is processed.

FOLLOW AFTN
Tweets by aftnwebsite
OTHER SITES TO VISIT